Introducing a new and exciting technology
development in refrigerated cabinets

The vast majority of commercial refrigeration cabinets hold food produce on stainless steel shelves and relies on cold air circulation to maintain food at the temperatures required. The effectiveness of this method of cooling will vary depending upon the density of the produce in the cabinet and it is typical that there will be warm spots where the produce is not maintained at the desired temperature.

In an effort to overcome this temperature variability, and to maintain food quality, the circulated air is often chilled to below freezing. This creates the need to run compressor defrost cycles which adds to overall energy consumption, leads to very inconsistent produce temperatures within the cabinet and can create uncomfortably cold shopping aisles.

This significantly changes the mode of operation of a commercial refrigeration cabinet, even in retrofit applications. Cold air circulation still plays a part but two additional cooling processes are introduced.

Since the shelf is itself directly held at a low temperature, it actively cools any produce placed upon it, air coming into contact with the underside of the shelf is directly chilled which sets up a process of natural convection which chills produce directly below it.

The effects, as have been confirmed under ISO controlled conditions at the Centre for Sustainable Energy use in Food chains (CSEF) at Brunel University, are far reaching;

The temperature of the air circulated around the cabinet can be raised above freezing. This provides a direct energy saving, and provides two further energy saving potentials since in-store heating to overcome excessive cooling can be reduced, and defrost cycles may no longer be necessary.

The consistency of produce temperature over the entire shelf is far better controlled.

Random testing in different supermarkets confirmed meat temperatures varied significantly within the same cabinet depending only upon the position of the produce in relation to the airflow. Extensive testing has confirmed that when the heat mat shelf is deployed, produce temperature can be maintained within a tolerance of less that 1C regardless of how densely the cabinet is packed.

It is possible the shelf life of fresh produce could be extended as a result of this increased chilling ‘consistency’. 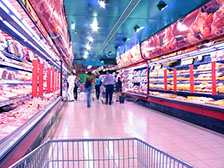 1 The system is easy to retro-fit

4 Less stress on the compressor

5 No defrost cycle is required

6 Effective in both open and closed cabinets